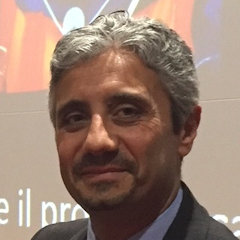 Optical communications represent the next big challenge in Satellite communication; core-business activities such as GEO Very High Throughput Satellite Systems (V-HTS) could get a real boost from this technology, enabling Terabit-class Satellites, together with new Non-GEO communication systems approaches. Eutelsat is currently participating to several R&D activities aimed to increase the maturity of the different building blocks as well as overall System level concepts.

Mr. Le Pera joined Eutelsat in 2007 and currently acts as R&D Manager and Advanced Payload Manager. He has been following the procurement of several innovative Satellite such as W2A (S-band Mission), EB9B (hosting EDRS), E172B (HTS mission employing an MPA), Quantum (flexible Payload including user defined coverages, Beam Hopping and Geo-location), while currently he is in charge of the Digital Processing Section embarked on Konnect-VHTS Satellite.

We are a global satellite operator shaping a fast-evolving digital society and enabling connectivity for all.

Via our global fleet of satellites and associated ground infrastructure, we enable clients across Video, Data, Government, Fixed and Mobile Broadband markets to communicate effectively to their customers, irrespective of their location.

Our 1000 experts in more than 20 offices around the world are driven by the shared ambition to extend the benefits of digital services to users on land, at sea and in-flight.

Mr. Le Pera will be speaking at the conference.